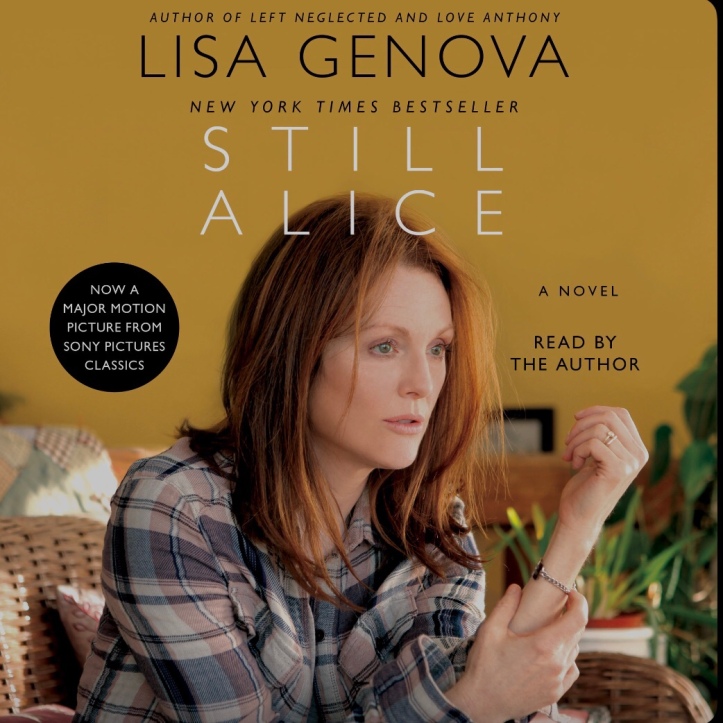 The book club I am a part of decided on Still Alice by Lisa Genova for our next book. A group of us that used to work at the Touchmark at Harwood Groves (retirement community) read this book years ago. Many of us thought we were starting to have signs of Early Onset Alzheimer’s Disease. That comment was not to make light of the subject, but so many of Alice’s initial signs were things many of us go through on a daily basis. I was about to opt out of rereading the book, but decided to download the audio version and listen to it on a trip to Fargo. The book was read by the author. She had a soothing voice that was easy to listen to, a voice that mimicked the main character. The movie adaptation was done well too.

When Alice first becomes disoriented in Harvard Square she is scared. She feared that something was wrong with her. She was having those concerns before but this was where it confirmed the uneasy feelings. She didn’t want to tell John because she was frightened, worried he wouldn’t believe her and embarrassed.

Once the doctor shares with her that she had early onset Alzheimer’s she had an out of body experience. She didn’t fit the criteria of someone with Alzheimer’s disease. She was a professor who taught on the subject of language and there she was having a hard time speaking simple parts of language. This was not a light diagnosis, she knew the effects it was going to have on her.

It is interesting that the author chose this profession for Alice. In a way it made it easier for her family to accept the diagnosis and in some ways it made it harder. Some family members had a hard time with it as she was so smart, how could she all of a sudden not remember things? Some I think accepted it more because she was so smart and in tune with her body. She just “knew”. Alice wasn’t necessarily accepting of the disease, but she knew it was happening and that made it easier for some family because she wasn’t making it a big ordeal.

Having worked in a retirement community with an aging population and memory care unit, it can be extremely difficult for family members to accept or understand what is happening. What a hard thing for Alice’s husband to meander through. All of a sudden it is like your spouse is taken from you. At a point they an forget you exist.

It is amazing that technology and medicine allowed Alice’s kids to get tested for the gene that caused Alice to be diagnosed with early onset Alzheimer’s. My personality tends to favor like Anna. If I were to not have kids I could handle not knowing if I carried the gene. If I wanted kids I think I would have to be tested so I could decide to take a chance on passing it onto my children. What a difficult position to be in.

Alzheimer’s disease causes the brain to venture and live in the past. She loved her mother’s butterfly necklace as a child yet wasn’t allowed to wear it. It made her feel alive to wear it. At first, it was a “why not” type of reason and as she began to fade back into a more childlike state it was a “can I get away with it” kind of feeling. As the disease progressed Alice had a hard time remembering that her mother and sister died in a car accident while she was in college. This is difficult on the person struggling with Alzheimer’s as they are constantly reminded that a loved one is no longer with them on a regular basis. It can torture the person. It is like hearing that information for the first time over and over again.

Alice planned on overdosing on sleeping pills when her disease progressed enough. This was something she could control in her life when it got too out of control. She was a person very much in control of her life. How unnerving to not fully know what you are or are not doing. In her mind this plan would put her family out of misery. They would no longer have to deal with her disease. Many people who consider suicide think this way, but they forgot how if affects their loved ones. Suicide hurts the family members far more than the person knows.

Family dynamics are so interesting and full of layers. Alice had three children and her relationship with two of them were similar compared to her relationship with Lydia. Alice’s standard expectation of her children were all the same. The expectation worked with Anna and Tom, but not Lydia. Alice read Lydia’s diary, this action probably wouldn’t have happened if Alzheimers didn’t happen to her. It was like she was not in her sane mind. Alice read it, though, to get a better understanding of Lydia. There is the saying “when the stars align” and by Alice reading her diary the stars kind of aligned for them down the road. Lydia was private about her life to an extent. By Alice reading parts of her diary, for example the part about Lydia’s boyfriend, Alice was able to retain that knowledge. If Alice didn’t read that, Lydia would not have shared this info with Alice until her Alzheimer’s progressed too far and Alice would not have understood who this person was to Lydia.

How amazing was it that Alice was able to put together a support group for her and others in her community suffering with the same disease as herself? She was able to surround herself with people that fully understood what she was going through. How awful of a feeling that people assume things about others when they are feeling off; rather than asking questions about how the person is or asking if things are ok (read The Four Agreements on this subject). If people would have stopped and asked Alice about some of the things they were witnessing she may have been diagnosed sooner, maybe she would have not felt so alone and maybe people would have had a better understanding of what they were seeing. There are some people with Alzheimer’s that alter into a person nothing like they truly were without the disease. I wonder if there are some that have no idea that this is happening to them. I am sure there are. How sad that they don’t help prepare others to share their true legacy. Share the legacy of their person they were before the disease took over.

Alice and John had a unique marriage. A marriage that seemed to work well for them. They were both highly educated people who were dedicated to their work. Alzheimer’s was the one disease that he could not handle. It was something he couldn’t fix. No one could as there was not a cure. He loved her, he tried to help find a fix, but he couldn’t deal with the reality. Being in her presence as her mind deteriorated was a weakness for him. He wanted to be far from her as he was not able to successfully maneuver this change. It is understandable why he wanted the job in NYC. He was young and it was a once in a lifetime opportunity. He was not well versed in the disease to understand, or accept, that moving her would likely worsen her disease. People with Alzheimer’s disease do not acclimate well to knew surroundings, or even to surroundings they have been in before, but are not around most of the time. John wanted to dive into work as it helped him forget the sad realities of his wife dying, even if she wasn’t literally dying.